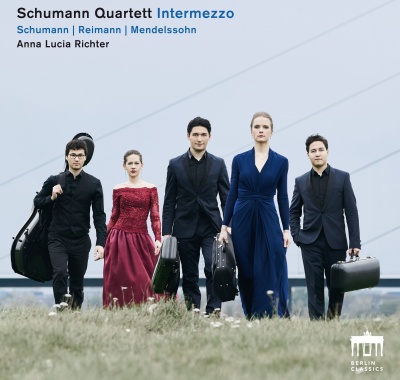 Robert Schumann String Quartet No. 1 in A minor op. 41

With its current album, “Intermezzo”, the Schumann Quartet is turning its attention to its prominent Romantic namesake on a recording for the first time. Robert Schumann's string quartet op. 41/1 is combined with Felix Mendelssohn's op. 12 and two compositions by Aribert Reimann: his “Adagio in Memory of Robert Schumann” and the Schumann transcription “Six Songs op. 107” for soprano and string quartet with the peerless Anna Lucia Richter.

It was time; indeed, it was almost overdue. The Schumann Quartet, which has been frenetically celebrated throughout the world by critics and audiences alike (“one of the very best formations among the current boom in quartets”, according to the Süddeutsche Zeitung) has finally paid reverence in the studio to its composer namesake. On the quartet's new CD, almost everything revolves around Robert Schumann, with deliberate connections drawn to his friend and contemporary Mendelssohn and to the present day with Aribert Reimann. The nucleus of the new album “Intermezzo” is Schumann's String Quartet in A Minor, op. 41/1, which has long formed part of the live repertoire of the ensemble, founded in Cologne in 2007: “We want to draw all that is best and most profound from his music. This piece has accompanied us for several years now, and we decided: now is the right moment to record this work,” says Mark Schumann.

Written in 1842 during the composer's so-called “chamber music year”, this quartet composition was first performed in the Schumanns' own musical salon for Clara's 23rd birthday. “I still consider it as my best work from the early years,” the composer wrote about the piece years later. And the fascination exerted by the work is undiminished to this day, both because of the riddles it poses with its enciphered (love) messages to Clara and because of its great emotional power: “It is poetic, lyrical music, music that dreams. When you have played this Schumann quartet, you have really gone through a storm of emotions […] it is an experience to play it,” Ken Schumann says in 2018 – a good 175 years after the work was written.

And indeed, the transformation of Classical and Romantic literature to fit the here and now is something that the Schumann Quartet, which will be “Artiste étoile” at the Mozart Festival in Würzburg in 2018, achieves better than almost any other ensemble of its generation. It is as if these four musicians had dipped the scores in a fountain of youth.

Erik, Ken and Mark Schumann, along with the violist Liisa Randalu, also display “fire and energy” coupled with “brilliant virtuosity and a willingness to surprise” (Harald Eggebrecht) in the String Quartet in E-flat Major, op. 12, by Felix Mendelssohn Bartholdy, the dedicatee of Schumann's opus 41. Here, a very different Romantic style can be heard, still clearly indebted to the tradition of Beethoven but with the verve and lightness of a unique 20-year-old musical talent who looked up to Schumann “as if to a huge mountain.” And, above all in the concluding Molto allegro e vivace, this work offers the musicians a welcome opportunity to experience a “wild joy in playing” (Liisa Randalu).

The two compositions by Aribert Reimann provide a direct Schumann bridge to the present day. It is worth noting that the Berlin composer is a direct descendant of the doctor who treated Robert Schumann in the sanatorium in Endenich at the end of the composer's life. This is one major reason why Reimann was very interested in the psyche of this “Freud of the Romantic era”, as Nikolaus Harnoncourt once called Schumann. And this recording of Reimann's “Adagio in Memory of Robert Schumann”, whose musical material is based on two incomplete chorales without texts, is the result of an intensive and very personal collaboration between Reimann and the Schumann Quartet.

In his “Six Songs op. 107” for soprano and string quartet, Aribert Reimann has created a transcription of these piano-accompanied songs that does away with the restrictions of the piano sound that Schumann himself lamented and opens up new and modern spheres of expression in the process. The virtuosic soprano Anna Lucia Richter, who received the prestigious Borletti-Buitoni Trust Award in 2016, shows herself to be the ideal singer for the work, especially in the way she phonetically chisels out the text as if the music itself were speaking.

For the ensemble's studio production last year, “Landscapes”, issued on Edel Classics, it received five Diapasons and the annual German Record Critics' Award, and was selected as “Editor's Choice” by BBC Music Magazine.

CD on JPC
CD on Amazon