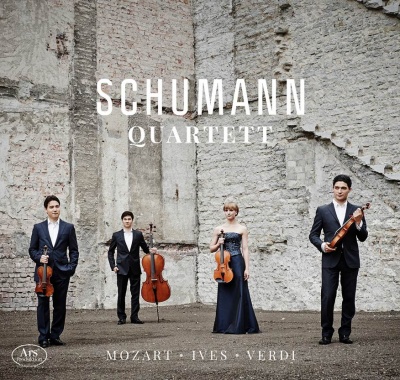 Since the Schumann Quartet was founded in 2007, its young, fresh, original perspective on music across the centuries has constantly guaranteed it eager listeners among the musical public. These four musicians seem first always to completely strip the heavy patina of tradition from every piece before shaping the now unburdened musical text into a new, coherent whole informed by a 21st century awareness of sound. “Together, they are really a power, a very special power, and are so inspiring, mutually inspiring among themselves,” wrote no less a critic than Harald Eggebrecht (Süddeutsche Zeitung) enthusiastically about their playing, thus giving the four the ultimate accolade in the ensemble scene. After their CD début in 2013, for which the three brothers Erik, Ken and Mark Schumann drew plenty of laurels from the critics (The Strad, for example, wrote: “a most auspicious disc debut.”), they are now presenting a new studio production, together with the Estonian Liisa Randalu on the viola. The three works recorded here have been in the quartet's repertoire for some time, maturing over many concert performances, which meant that “it was time to make our statement about the pieces on CD,” Erik Schumann says. What's more, a lot has happened since the last recording, he says: in addition to winning the Premier Prix at the 2013 Concours International de Quatuor à Cordes de Bordeaux and the music prize of the Jürgen Ponto Foundation in the chamber-music category in 2014, the quartet has also worked together very productively with Alexander Lonquich and Menahem Pressler, something which has had an audible impact on the quartet's development. “We have become far more open as interpreters and musicians; we are more alert and take more risks,” says Erik Schumann.

The new CD reflects this increased willingness to take risks on the basis of a matured artistic judgement. For example, the String Quartet KV 575 in D Major, the first of the so-called “Prussian Quartets” of 1789, is considered one of the very biggest challenges, not only among Mozart's works in this genre but also among all compositions by Viennese classical composers. This is largely because of the polyphonic tendency of the very independent voice-leading, in particular the prominence given to the cello part, which sometimes takes on an almost soloistic role. Giuseppe Verdi's only string quartet (1873), for its part, is unique in the Italian chamber-music tradition: “like a plant in the wrong climate,” the composer himself said. The Schumann Quartet accordingly felt challenged by this work to find an interpretational approach that allowed this “exotic plant” to reach full blossom. The String Quartet No. 2 by Charles Ives, on the other hand, is both a provocation and a vision: it was composed from 1911 to 1913 as a contrast to what this American composer considered to be the “emasculated” quartet sound usual at the time, and he gave it the subtitle: “S[tring] Q[uartet] for 4 men--who converse, discuss, argue (…) then walk up the mountain side to view the firmament!” The members of the Schumann Quartet were also well aware of the potential risks lurking here, particularly as it is a piece that “can only be created in the moment of the concert, in this one instant,” says Ken Schumann.

The verve, audible enthusiasm and breath-taking technical mastery with which the Schumann Quartet plays these three highly distinctive and unique pieces have been attested by the words of the music journalist Harald Eggebrecht quoted above. In the same article, he went on to write “that a quartet like this has a huge future.” And after hearing this new CD, listeners will be able to say with justified confidence: the future has already begun!

CD on iTunes
CD on Amazon